You’ve heard the stories of basement-made tech wonders, of two buddies messing around in a garage and creating a tech giant making a whopping  200,000,000 a day (let me help you there, thats two hundred million – a day). But what’s usually missing from those bed nights stories for entrepreneurs is the really awkward phase in between actually making your prototype and it conquering the market with your product.

Whether it’s hardware, software or just any-ware, a path for getting it from your proverbial garage to anyone or anything you want to sell it to is long, tricky, full of forks in the road and for the sake of sticking to the road metaphor, let’s say there’s a toll booth every few miles where you need to pony up some amount of money just to be able to get a bit further ahead. So, you’ll need money. Lots of it.

Luckily, there are more options today than selling your kidney and/or getting a mortgage on your (parents’) house. VCs, angel investors, convertible loans or equity investments, we’ll get to all of that, but let’s start this series with pitching to your peers for funding.

In case you’ve been living under a rock, here’s what Wikipedia has to say about crowdfunding, because I’m not spending my time typing about something you can easily Google, we’ve got more important things to talk about.

Let’s get to the WHY. I’ll just leave this screenshot of Kickstarter statistics here, and you tell me if you want to tap into that. 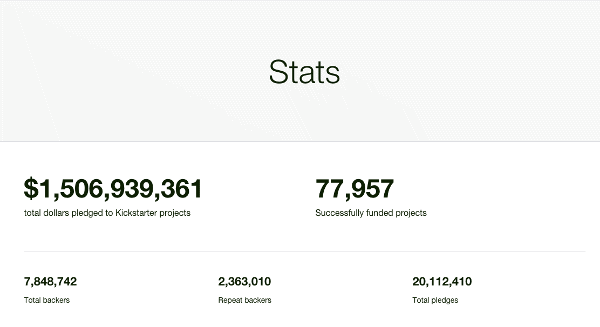 Unlike pitching your idea to VCs and angel investors and corporations, here you’re try to convince your peers, end users of your Awesome Product, that it’s worth buying, having, existing on the market. You’re also testing the water to see if the “Awesome” part is only in your head, or something people will really go crazy about.

In return for their “investment” in you, you’re not promising them equity (well, there’s also equity crowdfunding, but we’ll talk more about that later), but a certain perk, token of gratitude and most often a chance to preorder your product and get it at an early bird price & date.

That has some additional benefits – hey, you’ve got preorders! And also, if you do a good job, you can get a lot of free exposure and publicity, something you’d probably remember to actively work on way too late in the game, and realise it’s pretty hard to come by.

Let’s look at some more stats. if you ever get your business rolling, you’ll be doing a lot of that:

Those are the most funded project categories. However, don’t think that crowdfunding’s right for you just because you fall into one of them. Crowdfunding an idea probably won’t work, you need to have something tangible, a prototype you need to perfect and start manufacturing, a software that is halfway done or better, a game with a playable demo.

Crowdfunding is basically playing on people’s emotion and feelings (sort of like marketing!) and their need to be a part of something. I’ll let Amanda Palmer explain that for you because she’s awesome and will pull on your heart strings far better than I to make her point.

But you may have noticed that people generally don’t go around throwing their hard earned money on just about anything – crowdfunding consultant Sydney Malawer stressed that you need to prove you have a legitimate reason to ask for money.

Do you have a legitimate ask besides ‘we want money’?” People want to feel as though they are a part of something bigger than themselves, and they want to know that their money is instrumental in accomplishing that goal.

To sum up, you need to prove that you can actually deliver, and the money you ask for needs to be for a specific purpose. I need to fuel up my marketing strategy. I have an iOS app but want to launch an Android app simultaneously. I need to pay for the production. I need to produce a super-complicated-whatever-part to finish my Nifty Gadget. All legitimate claims.

I need money to make my idea into a product and see if it even works – Not so much.

Who’s it not for?

a) You’re not quite there yet.

You recognised yourself in the “dreamer seeking funding for an idea” part of the text? Get back to the drawing board and put some serious elbow grease into whatever you want funded. The nice crowdfunding people may want to give you that extra push you need, but they sure as hell don’t want to carry you all the way.

b) You’re way over that phase

Then you’ll want to talk to incubators, accelerators, or the nice people in suits (VCs and other investors) who not only have the money, but also the experience and know-how you’ll (really, really, really) need to get from the I-have-a-product-ville to the capital of Ive-got-a-sucessful-business.

Unless you have a highly experienced fully holistic team that covers every aspect of business imaginable, but if you did you wouldn’t be googling “How to raise money for a startup”, would you?

If you’ve read and understood everything above and got to the conclusion that crowdfunding’s right for you, be aware that this is not a cow that’s easy to milk, to be graphic. You will need to prepare for it and there is probably going to be some sweat blood and tears involved. But don’t worry, we’ll help you there.

In the next post, we’ll talk you through all the steps, from choosing the platform, deciding how much money to ask for, setting up your campaign and bring you tips&tricks from startup folk who’ve been and done that, successfully.