Living in the era of globalization and hyperconnectivity, we have become accommodated to a certain number of apps we use on daily basis. Most of us have installed Facebook, Messenger and Instagram, probably WhatsApp or Viber on our smartphones. They make our lives easier and help us communicate instantly and more effectively.

However, there is a plethora of other apps of the same purpose available out there that have pushed the limits even further and introduced additional features in order to delight users.

It is definitely an uphill battle to even consider tapping into such a competitive market. You would have to clearly define your unique selling point and think everything through so to avoid being just another startup with big dreams and no strategy.

Zalo (zalo.me) is the new market-leading messaging app from Vietnam, with more than 35 million active users.

Alternative apps may start as underdogs, but because of their usability and convenience they provide – they climb the success ladder pretty fast and reach a wide audience. Such is Zalo (zalo.me) the new market-leading messaging app from Vietnam, currently with more than 35 million active users.

How Zalo Was Started

In South Asia, a lot of messaging apps are battling for dominance. From WeChat to Line and international players like Viber, the list could go on. However, none of them recorded any significant success in Vietnam. That’s when Zalo stepped into the picture. Its main developer Vuong Quang Khai is one of the greatest experts in the field and was one of the first people to work on the underlying system for the Internet within Vietnam.

Vietnam’s smartphone market is rapidly growing. According to statistics, the number of smartphone users is expected to grow to over 42.6 million by 2022, which opens up great business potential.

It’s logical that foreign companies want to find a way to penetrate the market and enjoy their piece of the cake, but domestic businesses have one significant competitive advantage. They understand local culture and users’ expectations better, which makes them a favorable choice. In addition, Vietnamese consumers are local-patriots, which is why they are more fond of supporting homegrown companies opposed to foreign ones.

The reason why Zalo managed to outperform other apps of similar type is the fact it offered better user experience and optimal speed.

Zalo was built upon this foundation. It was created by the VNG corporation in 2012 with the intention of providing fast and reliable messaging that runs well on Vietnam’s unreliable 3G infrastructure and low-end phones that are widely used. Undoubtedly, it was a smart business decision to make the Zalo app available to all existing platforms.

The reason why Zalo managed to outperform other apps of a similar type is the fact it offered better user experience and optimal speed.

However, Zalo also outsmarted competition because the key decision makers have invested a lot of money into marketing activities, some say even $2 million in the first year following launch. They have covered all mobile ad networks and websites, as well as television. They also collaborated with people who would endorse the brand, all of which created the much-needed traction and set the road for future success. 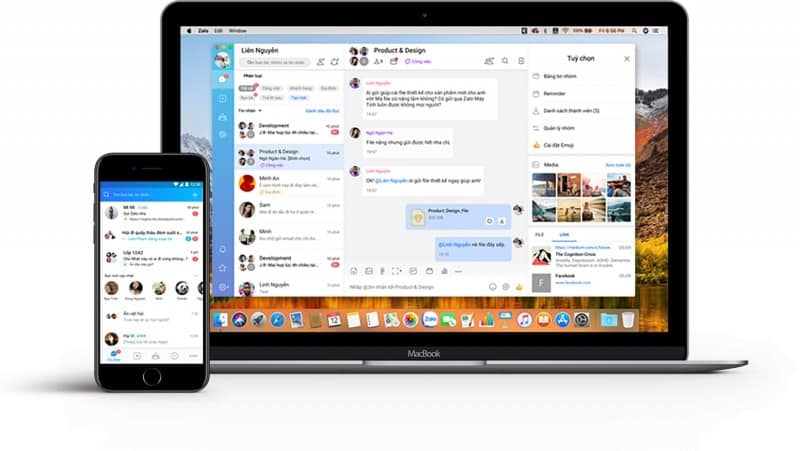 Currently, the world has social networks, traditional messengers, and over-the-top instant messaging services (such as WhatsApp). The idea for Zalo was to create an app that’s based on mobile-first and phonebook graph and combine context messaging and circle socializing, in order to appeal to a broader audience.

In this domain, WhatsApp is well known and widely used. However, there are very few fun features which is why the younger generations aren’t well animated. One cannot make a profile and there is a lack of social features; plus, the app is not adapted to the needs of the Vietnamese community.

By identifying these shortcomings, Zalo could efficiently leverage what WhatsApp has done right and make communication even easier, faster, and more fun.

Zalo can be easily accessed from both mobile and computer, and it has a variety of features available:

In addition, Zalo can be integrated with existing social networks and it offers the highest level of privacy, so you can rest assured your personal information and conversations will stay safely protected.

Zalo Pay, Zalo for Developers, And Much More

ZION, an affiliate of VNG corporation, has brought contactless payments to Vietnam and made a significant breakthrough with ZaloPay. The service merged the mobile platform with payments and social media. It is one of the leading solutions that made its appearance on Vietnam’s fintech scene.

The company is moving towards offering all-round solutions, and this approach has already resulted in significant business wins. For instance, thanks to the Zalo Shop, the company has tapped into the mobile e-commerce world and integrated with BoxMe and the Shipchung platform to help the sellers with professional assistance in e-commerce matters.

Technology is continuously evolving and so are the users’ needs, which keeps all the companies offering messaging services alert and constantly looking for new improvements.

Zalo has also signed an agreement with the Tien Giang Provincial People’s Committee in the Mekong Delta. It will play an important part in the process of digital transformation of public administration. Citizens can access key legal documents via the app and read the latest news that are relevant to them. In the future, Zalo will support the intelligent urban model and incorporate elements such as bus maps into the existing system. This will enable people to keep up with the times, make the most of the technology, and interact with the authorities more effectively.

There is also a subdomain Zalo for Developers where the technical staff can find all the necessary information regarding integrations and plugins, such as API and Android SDK documentation.

Technology is continuously evolving and so are the users’ needs, which keeps all the companies offering messaging services alert and constantly looking for new improvements. In such a fast-paced environment, you either adapt, or you fall behind.

We at Domain.me are proud to be a part of Zalo’s online presence and we’re excited to see them grow and change the way we connect and communicate for the better. If you have your own idea for a website, you can check if your .ME domain name is available here!