There is a little tradition in the making at the Spark.Me conference: awesome startups tend to gather there and pitch to show off what they’ve got and know. Ten teams got that chance this year, and pitched their way through a two day competition- yes, we were that cruel to make them pitch twice. But all their hard work was not in vain: the best team won the trip to San Francisco and Tech Crunch Disrupt Startup Alley, and that best tem was one other than Serbian startup FishingBooker.

FishingBooker had no easy task- they had to outpitch nine awesome startup sin the first round: Slovenian Edgar, Croatian LIVE GOOD, Awakening of Heroes and CyberCity from their own home country, Russian Anchor.travel, German 3DHair, Czech Ingen.io , Israeli Meetey and USA-based Fliiby. Having made it into the top three, Fishingbooker, Edgar and LIVE GOOD had less than a day to come up with a whole new presentation and use their three minute pitch in the finale to convince the jury that they are the ones who deserve to line up with other up-and-coming teams at TechCruch Disrupt Satrtup Alley. The jury, comprised of John Biggs, David Raskino, Diylan Dmitrov i Heather Russell, pondered on the startups’ ability to totally rock the Startup Alley, and got hooked on FichingBooker (bad pun intended). 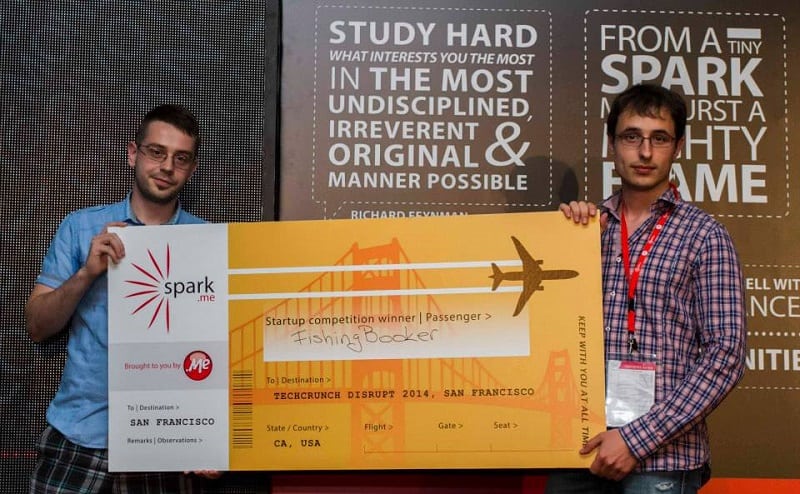 Now, you may wonder what exactly is this FishingBooker startup- well, the name is pretty much a dead giveaway- they book fishing trips. Marlin in the Maldives, or Bonefish in the Bahamas, wherever you choose to go for your next fishing adventure, this team will make sure that planning it is quick, fun and hassle-free. They work with boat captains and fishing enthusiasts, to connect the former with their customers and the latter to book an awesome trip anywhere int he world withou any fuss. This startup is also completely bootstrapped and is aiming to strengthen their position on the US market, so a trip to Startup Alley is basically right up their alley:

When we won at the Spark.me pitching competition we couldn’t believe it! We’ve already been talking for some time how it would be great to visit the Silicon Valley and strengthen our presence on the US market which is really unique. The amount of competition there demands that you have “boots on the ground”.

Going to the mother ship of all things startup was something they already had in their plans, but up until quite recently it seemed like a bit of a stretch:

Since we initially decided to bootstrap our project and fund it directly out of the company’s revenue, we considered Disrupt conference as a too expensive project until now. Thanks to you guys this has changed! I hope that we will find the right partners at TC Disrupt, and in addition to that, we’ve decided to extend our trip after TechCrunch and continue to Florida, where a large part of the world’s fishing charter industry is concentrated.

Well, dear FishingBooker, it is time to pack your bags full with business plans, pitches and big dreams. We wish you all the luck and are sending you off with lots of love from .ME 