Although Instagram has been here for a while, it seems to me that I’m using this awesome app more and more in the past couple of months. I’ve followed new people and I’ve been followed as well. Everywhere I go people are taking pictures and posting them to Instagram, and this got me thinking – is this app really that popular or have people just changed the form in which they are expressing themselves? If a picture is worth a thousand words, could it be that we are absorbing more information than ever before?

The answer is both yes and no. Pictures have emerged as a very important tool in social media and they are playing vital roles in out everyday lives. Whether it’s a picture of your friend’s cat or your cousin’s baby, images are telling us a very deep, very personal story. They are a window into somebody’s world and because of that, they are going to stay here for a while. But what happens when you take a fairly simple concept on just one perspective and double it? Well, you get an app that everybody in the Valley is talking about.

Name says it all. Frontback.Me is an iPhone app developed by an NYC based company called Checkthis. The app takes a pretty simple concept – it takes two shots from a totally different perspective using your front and back camera. In essence, this should capture the more intimate moments you want to share with your family or friends on various social networks. 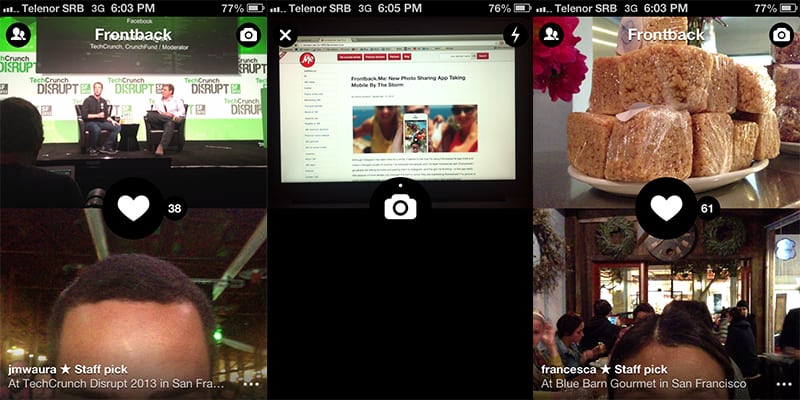 Once you download this free app from the App Store, you can login via Facebook or Twitter and you are ready to go. From there, you can access camera mode where you’ll find a split screen UI which will let you take a picture of what’s in front of you. After you take the first shot, the app will allow you to snap a second one, presumingly from the perspective of people you just took a picture off, thus creating a unique moment where all the participants are in the same image.

Although many are saying no, not another social network for pictures, Frontback.Me is accomplishing something only a few apps have managed to do so far – it has gotten everyone’s attention in the Silicon Valley and by the word-of-mouth marketing, people have been starting using it. And using it a lot! Just the other day, my whole timeline was covered in Frontback.Me pictures from the iPhone keynote.

With the Frontback.Me app people have combined what they love the most – their dear friends and taking selfies!