Roughly 2 billion people in the world use the Roman alphabet, the one I’m using right now to write this post. When this script is the standard in your mother tongue, as well as in English, which has distinguished itself as an unofficial official language of the Internet, it is easy to forget that there are other scripts out there – and that they sometimes pull the short straw when it comes to web usage.

If you are one of the 4 billion majority of those to whom Roman alphabet is not the primary script, you’re familiar with this problem – if you’re wondering what in the world I’m talking about, you’re about to discover a whole new world of ungoogleable names and terms.

Lets get empirical: I’m going to Google my name in Latin and Cyrillic script and se what pops up. 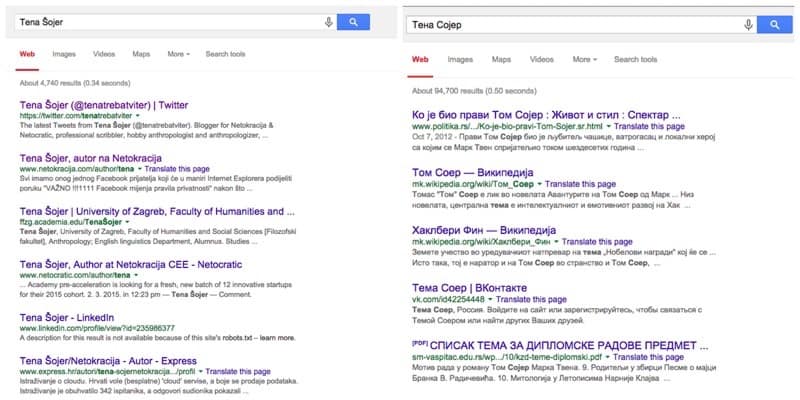 The Latin script search, using the Aa Bb Cc’s two billion of us learn to spell as toddlers, popped up with some lovely relevant information about me. There’s my Twitter profile, author profile on several pages, LinkedIn – the social network profiles and pages created with the specific intention of making me searchable, easy to find and connect with online.

However, when I tried to do the same in cyrillic, I pretty much ended up with a big fat nothing. The result would be pretty much the same if my name were spelled in Cyrillic on those profiles and I searched for it in Latin, making international and cross-script searches futile and useless.

In the age when social networking is not just a private affair but also a business necessity, being invisible to searches can be pretty troublesome. We like to think there are little national boundaries in online interaction nowadays, but clearly there is a great big gap between those who can be googled and some 4 billion unsearchables.

Ingraph.Me is trying to get around that problem by creating a multilingual social hub where you can search through people’s profile in English and in their native language, bridging the apparently very big gap between the two.

Their mission is to create one big social graph where no one is excluded on linguistic or national basis:

We would like to the whole world fully connected in one graph .. every one is searchable and reachable in a simple way.

This Egypt-based platform also has some cool features, like categorizing in your connections as family, friends, and professional connections, and as most hubs do, it connects your various social network profiles in one dashboard – the networks being Facebook, Twitter, LinkedIn, Pinterest and Google +.

For now, the Ingraph has 157681 users, creating a community where Tena is the same as تينا and Тена.