In the second installment of Meet The .Me Team, after we presented Maša, this weeks’ honor of being interviewed has been presented to Vuksan Rajković. Our Bussiness Development Manager does whatever it takes to convince everybody that .ME is the best. Often deeply immersed in his work, but when he suddenly cracks a joke the whole office laughs hysterically. However, I’ll let you be the judge, so without any more delay, I’ll let Vuksan tell you more.

I was born and raised in Podgorica, Montenegro, spent my senior year of high school in Hillsborough, North Carolina (Go Panthers!) and graduated English Language and Literature from the Faculty of Philology, University of Belgrade. I am currently bizdev at .ME Registry, a fancy title meaning “doing everything you can to boost the number of .ME partners and registrations across the world.

How would you describe your work style?

I would say it might be somewhere in the middle between spontaneous and organized. It is a chaos I am constantly trying to organize.

What advice would you give to someone who is starting in your profession?

Two most important pieces of advice for those who want to start a domain registry business would be: first, bear in mind that the usage is equally important as the number of registrations you get, and second, know your audience and stick to your selling proposition.

What do you do, when you’re not working?

I watch Game of Thrones, play basketball, go out and go to the beach during summer.

Tell us one embarrassing and/or silly thing about yourself.

Do I have to pick only one? When I was 6, I decided to visit my grandmother who lived 30 km away from my hometown. On foot. With my 5 year old friend. At the 7th kilometer a car stopped. They were some old neighbors who recognized my friend, and asked us what the heck we were doing on the road. They grabbed my friend and I ran away screaming “My parents told me not to talk to strangers!!”. Eventually they  got me too.

If you could be anywhere in the world right now, where would you be?

You have dinner with one person of your choice, dead or alive, who is it?

Noam Chomsky, because of revolutionary linguistic ideas and political views. And because he still rocks at 85.

What is the last book you read and how would you rate it?

The Bad Girl by Llosa and YES, I know I should have read it before. It’s 4 out of 5, if I am allowed to grade Llosa.

What is your favourite OS?

iOS. Everything works all the time.

nba.com and 9gag.com. Because it is funny pics and basketball. 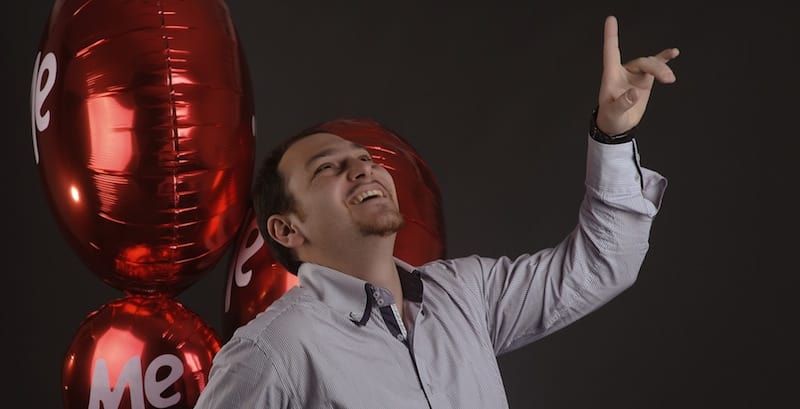 You are stranded on a deserted island only with your suitcase and five things in it. What are those?

I would definitely bring a shovel and 4 flare guns. There is always treasure on a deserted island and I hope some ship would see the flares I fire, after digging out the treasure.

Are you prepared for zombie apocalypse? How?

Yep. I’d cut of my right hand and put a chainsaw instead. It works, I have seen it in movies.

Like Twitter more as a source of information and use Facebook more for fun and connecting with friends. When it comes to work though, I use both equally.

If you could pick up a superhero power, what would it be and why?

Electricity manipulation. On Fridays, I would disable all the devices with the Internet access in the office and leave for the beach early!

We hope you have enjoyed this interview with Vuksan. Stay tuned for more interviews with .ME team and other interviews we are preparing every Wednesday!