When it comes to learning foreign languages, people usually turn to quoting ancient Latin proverbs, but I’m going to skip that and move straight onto why learning a second language is an amazing thing for your kid.

Yes, knowing foreign languages is cool, it is a great skill to have on your resume, it allows you to communicate with people from other cultures, and it’s so much easier to learn new languages when you start young.

It’s So Much More Than Just Language Skills

But there are even more advantages than that when you start young. When you learn your mother tongue, it’s like putting on special glasses that shape how you see the world. Learning a new language gives you a different perspective, so it’s not just words and grammatical structures – it’s a whole new look at everything that surrounds them.

It’s hardly surprising then that children who learn a foreign language (or two) from a young age also tend to be more creative and better problem solvers – after all, it becomes natural to approach things from different angles perspectives.

What you should keep in mind is that learning a new language shouldn’t be a chore for them – it should be a game, because that is how kid learn best. It’s learning by doing that really drives them, and thanks to our handy gadgets and apps, it has never been easier to immerse them into wonderful, colorful and playful interactive worlds where they can learn and play and grow.

I went through some trillion language learning apps and used my linguistic/ex-foreign language teacher super-powers to pick out some that both have good linguistic reasoning and methods behind them, but are also fun and beautiful 🙂

Gus on the Go

An app for parents, by parents, Gus on the Go allows kids to learn 14 different languages ( including Spanish, French, and Hebrew) with a little help from Gus, an animated traveling owl. The app is chock-full of vibrant animations and sounds that motivate children to explore more, and after each lesson, Gus encourages them to review what they’ve learned to unlock another lesson. But along with learning  a new language, by playing kids also practice their hand-eye coordination and fine motor skills.

Also, it has a lot of cool printables to enjoy offline 🙂 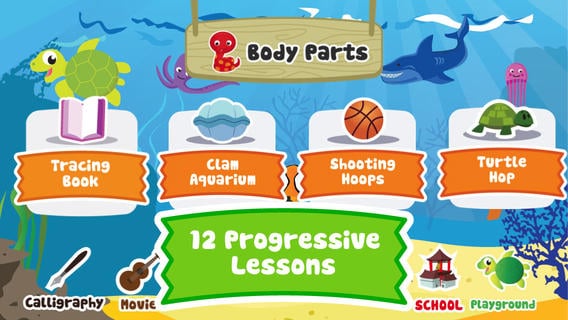 Did you know that Mandarin Chinese is spoken by over 1 billion people around the world? And if you’re the kind of parent looking to prepare your kid for any role in the job market they might want to assume one day, this is a smart choice – China is a great big market that will only continue to grow. Also, since Mandarin is so different in structure and syntax than English (and most western languages)., learning it seriously broadens your kids horizons. 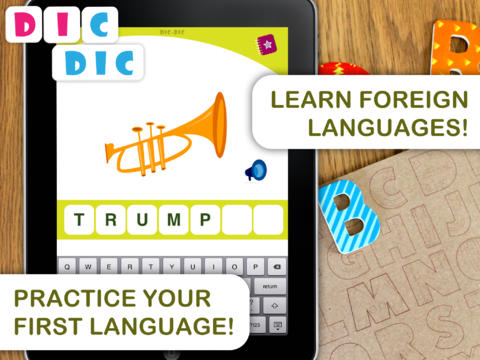 Dic-Dic is a spelling-bee like language learning app for kids 3-8 years of age. I suggest you use it as a second tool with some of the other language learning apps, because many of them do not put emphasis on spelling – however, spelling is also a big part of the language learning process. However strange it may be to spell according to a different set of rules, with Dic-Dic it’s far from scary or frustrating.  In a fun environment, kids learn to associate letters with their sounds in foreign languages – and that is no small feat! 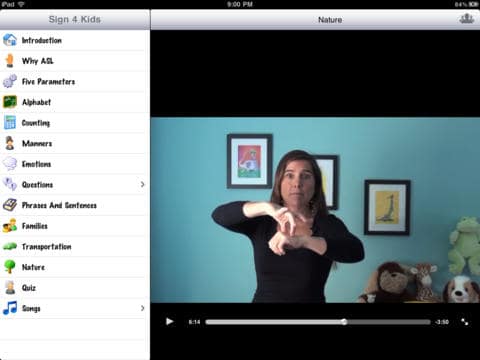 Rachel Briley, the instructor who teaches American Sign Language through this app, has over 20 years of experience working with kids, and it really shows. In high-definition videos, Rachel teaches kids letters, numbers, animals, family members, salutations and a variety of other terms you’d find in other language learning apps, but she also puts them in context through popular children songs like “5 Little Monkeys”,”The Wheels on the Bus”, ”Itsy Bitsy Spider.” Yes, you can sing/sign along in sign language, and I think it is a wonderful thing for your child to learn and explore.

Since sign language is also very dependent on facial expressions and stance, to give it the emotional coloring that otherwise comes from our tone of voice and stress we put in our spoken words, learning sign language also teaches kids about body language – an important part of communication in general!

If your kid is 10 years of age or up, and ready to take on learning another language on a whole new level, I wholeheartedly recommend Duolingo. From all the more advanced platforms I’ve tried out, it has hands-down the best methodology behind it. Linguistic reasoning, cute design, good gamification and motivation strategy and a vast number of languages (including Klingon!) – everything you need is there.