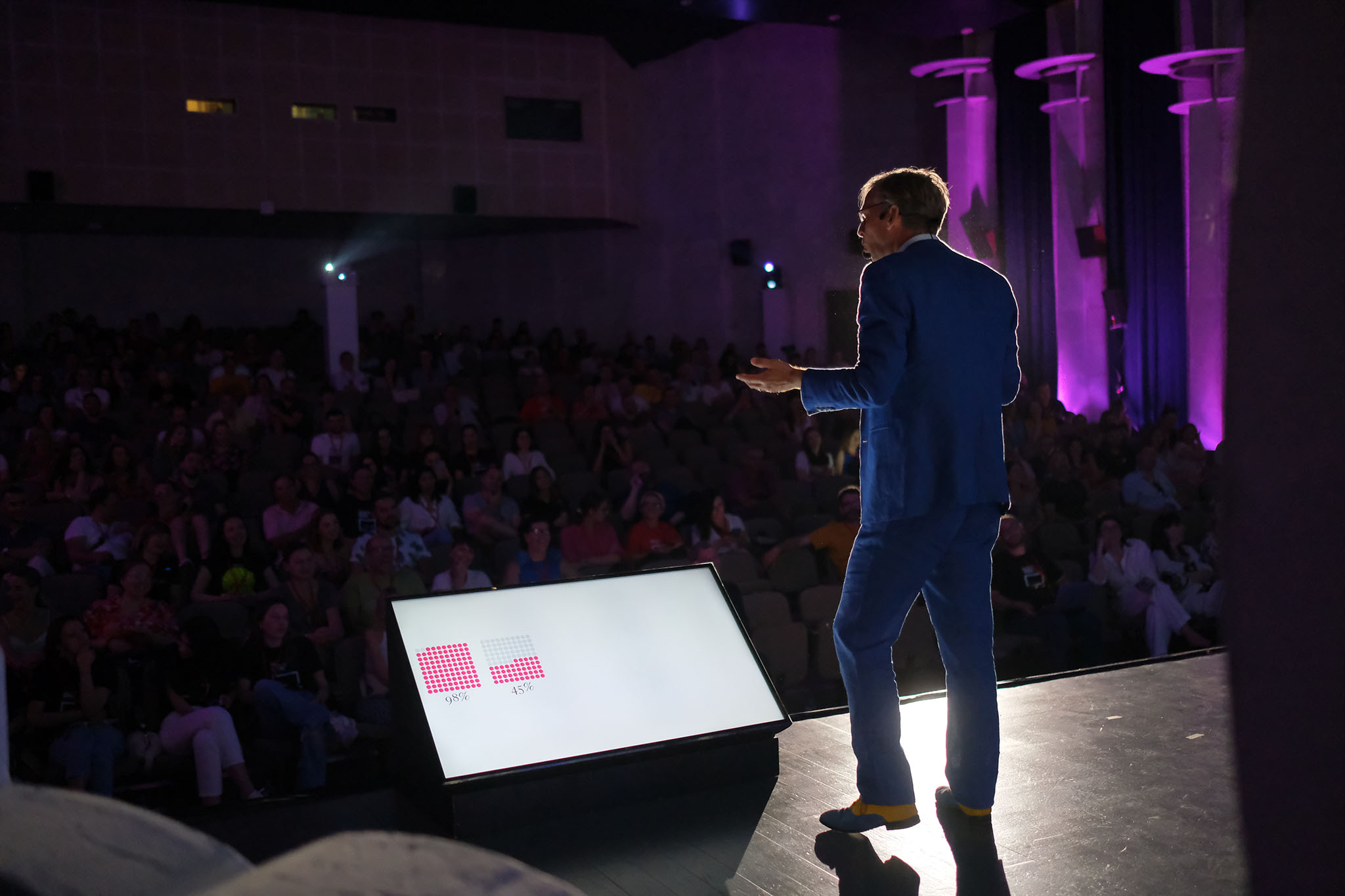 Tech-support making the tweaks in the back. Goodie bags hanging from the seats. The bright quadrant shining eminently from the stage. Welcome to Spark 2022 day two. This is where we explore ideas, nurture creativity, and inspire each other to dream.

Now, I wouldn’t dare to summarize the whole day two of the conference! Not unless I decide to write an ebook, that is. Yet my desire is to convey to you the absolute magic we all felt at Spark 2022.

So, let’s start with our first speaker.

Bringing The Stars Back

On September 25th 2022, the Dutch city Leiden will be home to a remarkable experiment, called “Seeing Stars Leiden”. All the lights will be turned off for an hour in the vicinity of the Leiden Observatory. Thus, the citizens will be able to see the stars in the sky. The event will be accompanied by all sorts of activities.

And Seeing Stars Leiden won’t be the first of its kind. Its promulgator Daan Roosegaarde organized such events before, and will continue to.

This experiment might sound mundane at first. Yet it is an exercise in a fundamental human right. The human right to see starts.

Really, the goal of Daan Roosegaarde is to create the landscape of the future. Firmly believing that the future is our capital, Daan says we must first imagine our future in order to create it.

Oh, and he’s built a type of new organic fireworks. And I kid you not – they’re called SPARK.

SPARK – a poetic performance of thousands of biodegradable light sparks which organically float through the air.

Ordinary fireworks don’t make much sense, said Daan. We want to celebrate, so we pollute the environment and disturb the animals around us? He and his team therefore created a sustainable way of celebration. Something they describe as a “poetic performance of thousands of biodegradable light sparks which organically float through the air”.

Visitors must feel wonder and awe when they see SPARK. It really looks like having stars just in front of you!

Hopefully, Daan will bring this wonder one day to Montenegro as well.

Our second speaker is an important speaker indeed. And speaking is quite important to him too – it’s his career. You can then imagine how excited he was about Lucas, his son, having to give his very first presentation in school. This was a big moment for him!

Therefore they practiced, father and son. One of the things Lucas would be asked at his presentation is, “What do your parents do for a living?” So they practiced the answer to that question multiple times. When asked about his father, Lucas should say, “My dad is a creativity expert.”

But that’s not what Lucas said. Instead what came out was, “My dad is a creativity explorer.”

“Experts know everything, whereas explorers necessarily don’t”, Härén explained. So when Lucas made his gaffe, Härén accepted his new title. He introduced himself as a creativity explorer ever since.

And he remained true to this title. Härén explored creativity in all its territories. His was a long journey, yet he allowed us (even if briefly) to join him on some trips.

Härén sought to answer this question by exploring the world’s nations.

And one of the nations he explored is China.

Not copyright, but something else

China is known to have a mild affinity toward taking inspiration from other countries. And this brings to results that might seem off to us. Like building literal city replicas.

And the Chinese market is generally known to have a copyright infringement problem.

What lies in the background of all this, Härén averred, is how the Chinese see creativity and imitation. You see, unlike in the West, the Chinese people see mimicry as a form of mastery. And it is even often encouraged!

Härén thus related to us about a conversation he had with a Chinese lady. The two spoke about copyright, when the Chinese lady made this endearing but insightful comment:

“Copyright? No! It’s not about copyright! It’s about copying right.”

Härén expanded on this idea by saying that a novel idea is born when someone does a simple combining. And he gave us this formula:

Wherein P denotes a person, K knowledge, and I information. In a word, an idea is created when a person (P) combines (+) knowledge (K) and information (I) in a new way.

Fredrik then showed us an example of this. He asked: what do you get when you combine a power line with a statue?

Supposedly you get electricity pylons shaped like humans, an idea developed in Iceland.

A Creativity Lesson To Bring Home From Spark

Talking about Iceland, Härén told us about one Icelandic word we all needed to know. Heimskur.

Now, I don’t know Icelandic. And so the word “heimskur” sounded so cool and profound to me! And it had to mean something cool and profound too, right? Probably it referred to an elusive, feared entity from Norse mythology. Or a type of Viking war chief that would lead their armies against their nemesis! Nope, turns out heimskur simply means “moron”.

You see, when the old Icelanders would travel and visit other countries, they would take the most valuable thing back home – ideas. Ideas that would improve their society.

Apparently, the root of the word “heimskur” (heima) means “home”. Talk about unexpected etymology! You see, when the old Icelanders would travel and visit other countries, they would take the most valuable thing back home – ideas. Ideas that would improve their society.

But in order to get these ideas, you had to travel. A person who traveled beyond would bring many ideas back. And the one who stayed home had no ideas. Hence – a heimskur!

So – don’t be a heimskur! Get out of your comfort zone and you will surely get new ideas.

How creative is Montenegro? Very!

Question number 1, all hands go up. No wonder there. Scarcely would a person venture to visit Spark if he reckoned creativity was irrelevant! Plus, the majority of people worldwide agree that creativity is important for their industry.

Question number 2. “Are you creative?” Like 90%+ hands go up. Härén is bewildered.

“The only country where I’d seen 90%+ people say they’re creative is the US”, Härén noted. So let’s say we surprised him!

Question number 3, merely a few hands are raised. No wonder here either. Globally, around 2 out of 100 people say “yes” to this question. “One is the HR manager,” Härén again makes us laugh, “and the other is the person sitting next to the HR manager”.

The obvious lesson here is that we can do more to step in and help each other nurture our creativity.

Spark.me continues its tradition of bringing together successful startups from all over Europe in its annual startup competition. This year we did it with the help of Infobip as Spark.me 2022 Startup Competition sponsor. Infobip is the first Croatian unicorn and a global leader in omnichannel communication.

Now let’s talk about the awards. The grand prize for the winner was the opportunity to attend the TechCrunch Disrupt San Francisco 2022, one of the world’s biggest tech and startup events! This is an opportunity for startups to pitch their ideas to investors around the world.

The grand prize for the winner was the opportunity to attend the TechCrunch Disrupt San Francisco 2022, one of the world’s biggest tech and startup events.

Infobip has provided additional prizes for all 10 startups taking part. While a $20,000 voucher in credits for Infobip products and services will be a prize for 9 startups in the competition, one startup will have a chance to win the Communications Award in form of $50,000 in credits for Infobip products and services as well as the 2 tickets for Infobip Shift 2022, the largest Developer event in Southeastern Europe that will be held on September 19-20, 2022 in Zadar.

On day one of Spark, we heard seven startups presenting their ideas and competing for the finale. Now on day 2, three of those teams would compete to get the top awards. These teams were:

MedPack. The solution they wanted to tackle was patients missing taking their therapy. To that goal, the team behind MedPack designed a smart pillbox that helps patients never miss out on their therapy. The pillbox is accompanied with an application that tracks therapy usage, as well as reminds the patient to take the medication at the predefined hour.

BeBeep. Even though the distances between the cities in Montenegro are relatively small, traveling can still be frustrating. The team behind BeBeep discovered that inter-city travel was a nuisance to many Montenegrians. They therefore developed a carpooling platform which allows for a more cost-efficient and frictionless travel.

WithMe. The team behind this idea wants to solve a problem they were facing while students. And it is the problem of finding a roommate. Their idea is developing a platform where people (especially young adults and students) could find roommates.

After their superb presentations, the jury was happy to bless the MedPack team with the main award, and the BeBeep team with the Communications Award.

The Spark.me conference brought awe and inspiration to us all this year too. Be it stars, Icelandic travelers, or literal sparks, stories were shared which will fuel our dreams. At least until we meet again, at Spark 2023.

A digital marketer and a statistician. Wears blue all the time. Gets lost in current marketing discussions and centuries-old books with equal intensity. His favorite book was published in 1611.