It is sad to say, but this Steampunk Summer series is coming to an end. Summer is ending, but steampunk isn’t. To send you off into the world, in this final installment we will tell you about cons and fairs, communities and groups that you can find online and offline, thus living your steampunk life in full. It is the point in time and space that we’ve been preparing you for. So with a bit sadness and one more information flow, let’s continue with this final chapter.

Perhaps the best way to meet new steampunk friends is via online communities. There still isn’t one central place for steampunk enthusiasts, but there are several very good sources. One of the most obvious one is Steampunk group on Facebook. Maybe not a community itself, it has a variety of information that aren’t necessarily tied only to North America. So there is a plus for the rest of the world. It has 20,000 members and counting.

One of the most famous independent blogs with a forum is Brass Goggles. It can suck you in for hours if you’re not careful enough. One of its biggest competitors, or should I say colleagues, is Steampunk Empire. We can call that one the social network for the steampunk with events, forums, pictures, etc.  The Clockworkers Guild’s Journal is Livejournal community that rather than being full of trade, shows upcoming events and things that people are interested in.

So you are listening to the Clockwork Cabaret, your favorite steampunk music podcast, and reading Steampunk Magazine but, at some point in time, you want to let your steampunk flag fly offline. A lot of conventions are steampunk friendly like SDCC, DragonCon, but let’s focus on those that are really steampunk. The Steampunk World’s Fair started in 2010 and it is located in New Jersey. It is so popular that hotels that are associated with it, are already sold out for the next year.

Teslacon is one of the largest cons, located in Madison, and Steamcon, located in Seattle area is going strong for the fifth consecutive year. However, if you are in, lets say Europe, there is Euro Steam Con. For the second time steampunk events are held at the same time, literally all over the Europe. It is happening in about two weeks from publication of this text, but much closer is Weekend at the Asylum. From 2009, it is the largest european steampunk festival, located in asylum in town Lincoln, UK.

From Big To Local

But let’s face it. Those are rare treats and lot of us aren’t anywhere near those locations. Some of us aren’t that mad about sensory overloads that big cons and fairs can produce. So here are few tips on how to start locally and expand and build your way up to that. Don’t be surprised if you meet people with a lot of similar characteristics. Not to say that those are requirements, but steampunk attracts certain personalities, mainly creative individuals that are really into history, but community is made of all kinds of people.

Local events can vary, from an informal gathering at someone’s house, to meet ups at a local caffe. Usually, steampunk bunch isn’t afraid of culture, so don’t be surprised if something is happening at local theatre or museum of technology. Roleplaying is very common, either for an table top RPG or live action role playing (LARP). Sitting down at table and throwing a dice, or acting out your new ”steamsona” (creating a character when you’re in costume, not obligatory in any way) in full gear, it is great way to break the ice, socialize and meet new people. 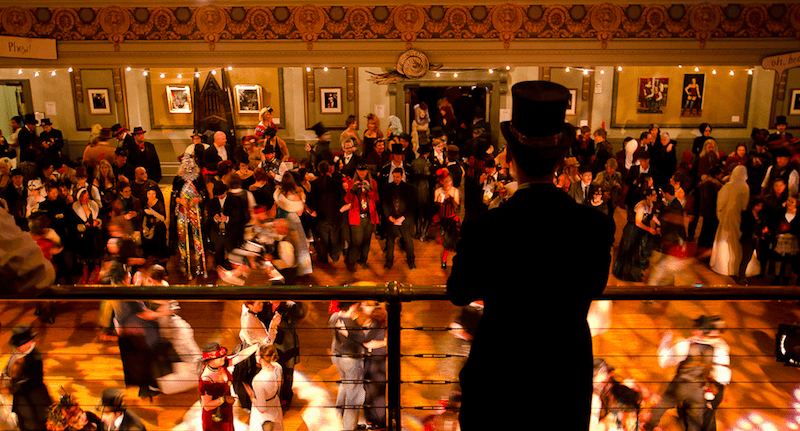 If you have some organizing skills you can try to make some of these things yourself. Usually these events all around the world don’t have big sponsors behind them, just a few enthusiast that devote their time to put them together just because they love it. If you are timid, start small, soon enough you’ll get so tangled up you’ll forget that you are a bit shy. You don’t necessarily need to look the part, although it can help other Steampunkers to identify you only with one glance. But it is inside, not outside that counts. You can be anyone and believe anything and you can still be a Steampunk. Like we said at the beginning:

”Steampunk is a way of living”

So with several sniffles and a tear here and there, we’re sending you off to live and love all things steampunk. If you get lost or forget something, feel free to visit us again to re-read any of Steampunk Summer series here on Domain.me.