2016 is almost over, and we have seen some pretty great things and innovation throughout it. We’ve seen a lot of great trends and ideas (such as Tesla powering an entire island with solar power only) and we would like to take the time and round up all of the things that technology made possible and that we can be thankful for Thanksgiving in 2016., while we slowly look towards 2017.

1. We Won’t Have To Welcome Our New Chatbot Overlords

IA has stirred up a lot of us because of the potential to replace human labor. Be it smart cars or smart waiters, a lot of people might find themselves out of work… But is that anything new?

From elevator operators to slew of other jobs, the work we’ve done has come and gone with technological and societal progress. 100s of types of jobs might not even exist in 10 years, just like 100s have made way for new opportunities up until 1980. Does anyone expect to become a horseback rider for the Pony Express? Probably not – but you can become a blogger, community manager or designer instead.

While chatbots, that we wrote about just last week might be the simplest form of AI you can make these days, they do show how we can improve our (digital) lives with a bit of creativity – and a few lines of code. These opportunities are definitely something we should be thankful for, especially when you think that…

2. Will You Be A Citizen Coder?

Thanks to initiatives such as Hour of Code and Girls Who Codes, kids around the world are learning how to not only consume digital content but also create it: Apps, bots and everything in between.

These kids will grow up not just as citizens who live in a world of possibilities, but will be able to create their own technological progress – literally bit by bit – becoming “citizen coders”.

Codeacademy is home to more than 30 million 'citizen coders' - will you be one of them?

These kids won’t just be able to effectively use all the data their governments or societies provide to help themselves, but also be part of new industries who need their talents. As ReadWrite’s Lauren Orsini writes:

In 2010, there were 913,000 U.S. jobs for software developers and that number is expected to grow by 30% from 2012 to 2020, according to the U.S. Bureau of Labor Statistics. Meanwhile, the predicted rise for all occupational growth over that same period is just 14%.  As our dependence on technology only grows, our demand for developers is increasing. At a time where the average developer gets four to five job offers in her career, that means some companies are going without.

With all the opportunities for positive societal change and amend the digital reality, I think we should be thankful that our kids will be a part of it!

Big data has been a keyword since 2015., with both large companies and startups trying to be the next hub of everything they know about us, is this trend inherently dehumanizing? It’s data after all!

Not at all. While all of us are already trying to, as Collin Strong explains in his book “Humanizing Big Data”, use an ever increasing amount of data to better understand and interact with our customers, it’s the people that work with this data that are essential.

While we definitely need the apps and algorithms, we also need the humans (social scientists, psychologists etc.) that will be able to understand and interpret all this data. Even when you have a lot of it, data is nothing without a human’s touch – showing how thankful we have to be for what’s we accomplished so far with simple data sets, but also what we can do next!

If you’re into startups, you know how many technological success stories reside in just a small patch of land famous for tech companies in California. Sillicon Valley is key to the tech industry, but over the past decade, there have been a lot new valleys, roundabouts, and cities who have joined the tech world.

We wrote about slews of companies coming out of Asia and Africa that have become important players on the international scene, showing how the best and brightest of tech aren’t just in San Francisco or London.

Sillicon Valley has also taken note, with 500 Startups launching a new fund for Southeastern Europe just this October, after dedicating special teams in Mexico, India, as well as Scandinavia. This isn’t a new development, with 500 Startups already investing in over 119 startups from Southeast Asia, but actually a sign how far local startup markets have come. Software might be eating the world, but let’s be thankful that it’s not confined to just one market or region – the next generational of technological entrepreneurs are all around the world!

Traveling is becoming cheaper, with tourism creating an environment where everyone will be able to travel and discover the rest of the world – according to tourism magazine Skift’s Rafat Ali.

We actually want to travel thanks to tons of content that we’ve seen on television, YouTube and other media – specials such as Michael Palin’s legendary 80 days around the world special you probably saw on BBC:

AR and especially VR show us another glimpse into the world we live on, but haven’t yet discovered. It’s going to be exactly these immersive experience that won’t replace travel, but will actually give us the best possible sneak peak into cultures and cities that we want to be a part of. Never have so many people traveled abroad and never has there been such potential for the exchange of ideas – thanks to inspiring people to travel. VR, no spoiler please, I’ll be thankfull to see, smell and truly discover new worlds when I travel to them.

Well, 2016. has really been a great year for .ME, and we’re proud to say that there’re been a few milestones for us as well. However, none of that would be possible without the great team we have, and for that, we’re truly thankful. After all, it’s the people we work with that are the reason we’ve made so many great things last year, and we can only wish that we continue in the same direction for years to come.

On the business plan, however, we’ve been rather busy. In March we’ve reached a domain number milestone, with over a million registered .ME domains! That’s a million webshops, personal websites, and cool ideas all living under the .ME name. We’re extremely thankful that you, the readers, have recognized the potential of .ME, and selected our domain name from over a thousand others for your online homes. Thank you!

We grew to one MEllion strong in 2016. Thank you for trusting us and choosing .ME as your online home!

Our next great milestone came in April, with our collaborating with the world’s largest social network, Facebook. By launching M.ME Messenger links, Facebook has entered a new era of bots and similar services, and we’re very proud to be the domain that works with them on this new technology. Starting from this year, you can simply create your business’ address on Facebook by using m.ME/yourbusinessname, and besides looking cool, it’s pretty amazing, too. 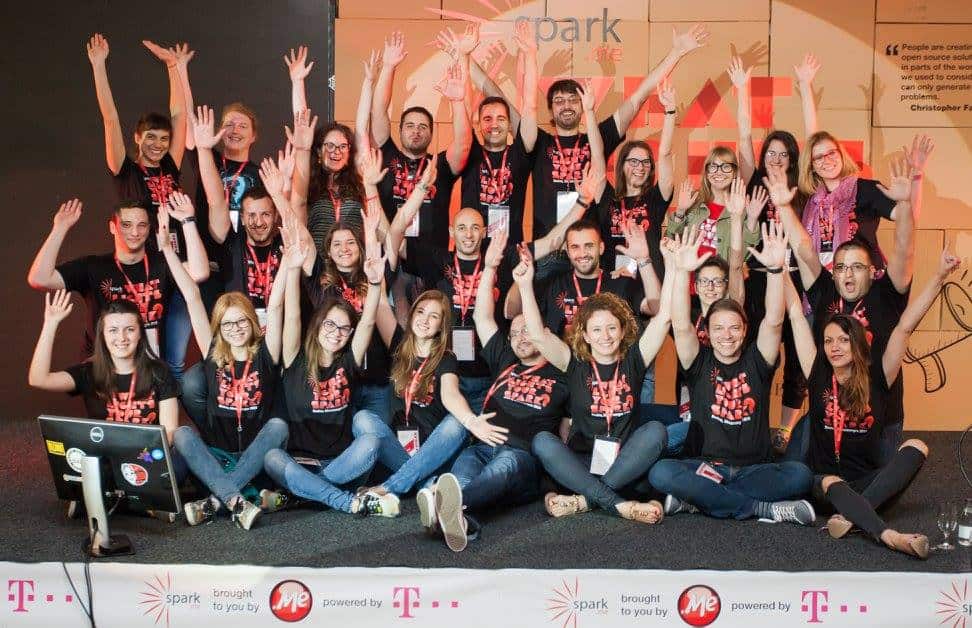 Last, but definitely not least is the conference that rounds up everything we work for: the Spark.Me conference. This year’s event was bigger, better and more fun than any other, and we’ve had the chance to listen to some of the best speakers you can find, like Andrew Song, Paul Papadimitriou, Tony Conrad, Brian Solis, Sara Rosso, Frank Gruber and many more. There wasn’t a single person who wasn’t left inspired after the conference, and that’s really what Spark.ME is all about. We’re thankful for having the opportunity to inspire and ignite the spark in people, and we’re waiting for you at Spark.ME 2017.!

Technology Helps Us With A Lot

This Thanksgiving, when you hug your loved ones and think about all the far more important things you should be thankful for in your life, also don’t loose sight that a lot of new things will become reality thanks to technology.

Keeping in touch with loved ones as well as doing something your grandparents hadn’t even thought of is possible in 2017. – and we should never forget that while technology might seem a bit complicated and hard to understand because we don’t know what to expect – it’s precisely that what makes it potentially life changing.