When discussing the evolution of the digital ecosystem, I love to emphasize that we’re living in the hyperconnected era. With the rise of the cloud, the physical boundaries are vanishing, letting us upload, run, and manage all our apps and data using different devices simultaneously, whenever and however we want. All our apps, tools, accounts, software pieces, and devices don’t exist in a vacuum anymore. They’re now highly intertwined in order to provide us with a seamless user experience.

But, is this really so?

With such a rapid evolution of the IT industry, personal computing seems to be so ‘90s, but somehow, it still seems to be dominant. Just take a look at Windows and a plentitude of apps that can run only on it. The same goes for smartphones and tablets that have their own, iOS and Android operating systems. So, for example, some apps available on iOS cannot be installed on Android and vice versa.

I don’t know about you, but I find this phenomenon extremely frustrating. It slows down our daily operations, impacts the communication between team members, and requires the installation and maintenance of multiple apps.

All our apps, tools, accounts, software pieces, and devices don’t exist in a vacuum anymore. They’re now highly intertwined in order to provide us with a seamless user experience.

Fortunately, an amazing platform we’re going to talk about today has already been changing things for the better. Let me give you a hint. We’ve already written about them in 2015. Not once, twice. They describe themselves as “the only global, infrastructure-independent platform built to deliver Windows apps and workflows from the cloud.”

Yep, that’s Frame (fra.me). And, the reason why we’re talking about them is great. They’re now stronger than ever and the world needs to hear about them!

The Frame Timeline: How they evolved over time?

Frame was founded in 2012 under the name Mainframe2. Back then, the CEO of the company, Nikola Božinović, worked at MotionDS and was at the forefront of a team trying to virtualize their video analytics software. However, their attempts to build a solid, fast, and smooth VDI solution proved to be a huge waste of time. Their software was too slow and complex and, above all, completely different from what Božinović envisioned. It didn’t meet his core idea, which was to build a cloud-native desktop tool that lets users run any Windows app in their desired browser.

Here is how Božinović, describes their first steps in one of his recent articles:

“Our journey started in early 2012. As CTO of MotionDSP, I was responsible for designing and shipping world-class video processing software. The technology, like many others, was packaged as Windows software. It was hard not to envy my counterparts in SaaS companies: Wouldn’t it be great to build one version of our application that we’d deliver as a service and update whenever we wanted?”

This is how Mainframe2 was born. Back in 2013, they started using a powerful AWS infrastructure that gave them the opportunity to grow and scale fast. With their revolutionary NVIDIA GPU-based instances, they finally got a chance to put their software in front of thousands of customers. And, it was legen…wait for it…dary. 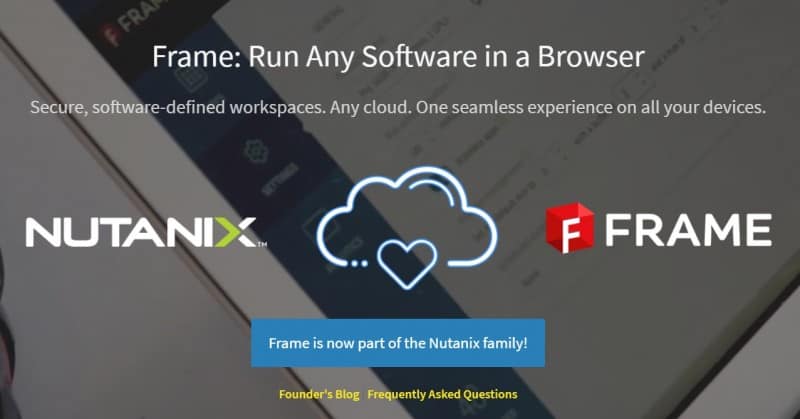 Proving the importance of rebranding

We’ve written extensively about the art of rebranding, as this is one of the most common phases startups need to go through. Simply put, as your business starts growing, its products may change, as well as your focus and target audience. As branding is all about symbols that make you authoritative and recognizable, you will need to adapt your strategy. And, this is what happened to Mainframe2.

“The Mainframe2 name had a simple idea at its root: decades ago, in the early days of computing, a typical setup consisted of a large mainframe computer connected to a terminal that was used to display an image and gather input. We reintroduced a similar concept in the cloud as a new generation of centralized computing,” emphasized Božinović.

For their early customers who were software vendors, this name was clear and understandable. However, the company expanded their customer base and has now become available to anyone- from large enterprises to individual users. This is why they needed to think of a name that would reflect the major ideas behind their product and, at the same time, be intuitive and approachable even for its laymen users. And, Frame sounded like a perfect option.

From its creation, Frame has been picking up steam. In 2017, they secured eye-popping $16 million round from numerous eminent investors like CNTP, Bain Capital Ventures, Microsoft Ventures, and In-Q-Tel. For now, they’ve tripled their revenue and have raised $28.5 million to date. Their clients are famous companies like Adobe and they formed strong partnerships, including the one with VMWare. Most importantly, even though their platform was originally built for only for AWS, they have expanded their support to Microsoft Azure, too.

Nutanix shares our vision of simplifying critical IT functions so companies can save money, save time and still achieve exceptional performance no matter their underlying infrastructure, and we’re so proud to be joining the familyNikola Božinović, founder and CEO at Frame

Still, their greatest win is probably their acquisition by Nutanix, a global leader in enterprise cloud computing. Combining the reliability of on-premise services with the flexibility of the cloud, Frame offers Nutanix users a delightful user experience and lets them deliver DaaS from multiple clouds effortlessly, without having to install anything.

Simply put, Frame is 100% automated app-streaming service. So, no matter if you are a software vendor, a school, an individual user, or an enterprise, this tool allows you to centralize all your Windows apps within a single dashboard and access them directly from your favorite browser (apart from Chrome, it also supports Safari and Firefox).

Now, we’ve already mentioned some of the major benefits of Frame for users:

Still, one of the most common questions the people behind Frame get is how their solution is different from some traditional VDI options like VMware. Well, here are a few features of Frame that make it unique in its niche.

Most VDI vendors advertise the cloud solutions they offer, even though just a small portion of their offers is really run in the cloud. This is where Frame comes to shine, as the cloud-first end-to-end platform that uses only cloud-native tools. The guys behind Frame say its fits cloud like a glove and they’re right. Instead of creating it on on-premise services and then adapting them to the digital ecosystem, they simply built Frame in the cloud from scratch.

It provides its customers with a greater flexibility. They’re given the opportunity to put all their apps under one umbrella and manage them from one dashboard, from different locations and using different cloud providers. This results in an impeccable user experience, simpler administration, improved performance and, unsurprisingly, lower operational costs.

The major problem with the old school VDI solutions is that most of them are fixed-cost. This simply means that their users will have to pay for the capacity they didn’t even use. On the other hand, Frame is based on the core principles of flexibility- it keeps track of their metrics regularly and tailors its solutions to the users’ needs. This is what makes it the only genuine pay-as-you-go end-user computing platform, meaning that you’re charged for only what you really used.

Frame’s APIs allow you to integrate your existing online workflows. You can:

Check their site to see all the integrations available.

Frame includes security controls and certifications for sensitive data and workloads, such as the SOC 2 certification they got in 2016. The reasons why some of the world’s most secure companies put their trust in Frame is obvious- it is the ultimate security option.

In this era of hyperconnectivity, we need to make our apps work for us. They need to be perfectly synchronized and work seamlessly, irrespective of the device we use or our location. With Frame, this is finally possible.

First, they’re using the up-to-date encrypted protocol that keeps the connection between a browser and their servers out of hackers’ touch. Second, the fact that your apps are running in the digital ecosystem and not on your computer means that your sensitive information can never leave their secure data centers. After each section, the VM you worked on is destroyed, which eliminates any possibility of cyberattacks and unauthorized breaches.

Probably one of the major benefits of Frame is that using it is not a rocket science. Its developers strived to create intuitive, layered UI design and user-friendly interfaces adapted to both its users and admins. They based the platform on simplicity in order not to overwhelm the users with lots of features they don’t really need.

In this era of hyperconnectivity, we need to make our apps work for us. They need to be perfectly synchronized and work seamlessly, irrespective of the device we use or our location.  With Frame, this is finally possible.

For the first time in the history of the digital landscape, it doesn’t matter if your operating system or your hardware configuration supports a certain app. All your apps will be managed under Frame, allowing you to switch from one device to another.

So, the next time you get an awesome idea on how to complete your project in the middle of the night, with Frame, you can access it easily in a few clicks.

We cannot emphasize how much we’re proud that Frame chose .ME to polish up their online presence. And, we would like to support you, too! No matter if you’re choosing your domain name for the first time or rebranding, .ME is all about you!