Gaming is taking the world over with a storm, there’s really no doubt about it. We’ve written about how esports are shaping the future of professional competitions here on the .ME blog, and the steps you need to take to know more about esports and competitive gaming in general. Considering that you’ll soon be hearing a lot more about esports, you might as well get more familiar with this trend.

But what happens if you’re already a part of a team and are playing a game competitively? How do you practice against others, and how do you hone your skills against other teams? Well, the answer is –through a process called scrim. To put it bluntly, scrim matches can be compared to friendly matches in other sports, where two professional teams play each other for practice. The benefits of this are pretty obvious:

There’s more but the main reason for the scrimmage is that you play relaxed matches against other teams, instead of random people on the internet. This means more quality and better training opportunities.

Both Amateur And Professional Teams

It comes naturally that there would exist a service that would allow teams to scrim with each other and play games through an automated system. Such a thing exists for League of Legends, and it’s called ScrimWith.Me. To find out more about the scrimmage, the process and the ideas behind the site we sat down with Đorđe Spasić, the coach of the Serbian LoL team X25 and one of the fathers of the ScrimWith.Me project.

To start off, we asked Đorđe what’s the app all about, and to tell us a little bit more about why it exists:

ScrimWith.Me was made with the goal to make professional and semi-professional teams, as well as amateur ones able to find their scrim partners, or practice partners if you will. By using the app, the two teams that arrange the scrim match will use less time on the arrangement process itself which will leave them with more time for practice and the matches themselves. Our app is currently focused on League of Legends, but soon it’ll spread to other games as well.

The Importance of Practice

The app itself serves as a sort of connection between teams, and to make it easier for teams to find others to play with, effectively bypassing all of the arrangement troubles one can find while arranging a match for 10 different people.

Our guest, Đorđe, is a known face on the regional esports scene, where his experience as a coach is highly valued and appreciated. His motivations for making the app lie in his familiarity with the League of Legends scene and the teams that play there, but he isn’t alone in the project:

There were three of us working on this project. Aside from myself, we have Lazar Mladenović and Marko Gligorijević, both computer engineers. This idea would have never come to life if it weren’t for them because their expertise helped make the website both work and feel good. We’re also good friends in our private lives, so that makes it a lot easier to work on projects together.

ScrimWith.Me serves as a sort of connection between teams, and to make it easier for teams to find others to play with.
A good team makes any job easier and having good industry knowledge surely helps in finding out just what’s lacking and what can be fixed, which is precisely what ScrimWith.Me is doing. Considering that this is something new in the region, the team tried to make the app as user-friendly as possible, so that it can be used by any and all gamers who want to practice in a more arranged manner. Đorđe notes that the only things you need to start using the service are your credentials, and fill out the information about their team. They can then start finding available matches with ease. 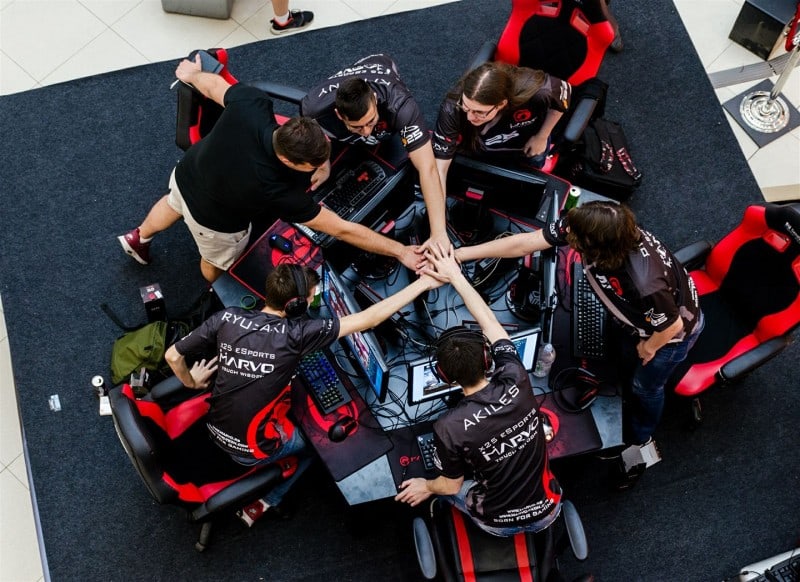 Considering that the regional teams don’t have a lot of opportunities to practice online like the bigger teams, this app couldn’t have come soon enough. Đorđe says:

Considering that I’m a League of Legends team coach, I look at this extremely seriously. It’s very important to train and practice to get better because without a lot of effort and investment there’s hardly going to be any progress of a team or an individual player. We want the time you spend practicing to be used in the best possible way, which brings coaches into play who are also overlooking the scrim matches and giving advice to their teams on how to get better faster.

When it comes to the site, Đorđe says it was natural to pick .ME as their domain because the website name sounds much better and more personal, which frankly is what .me is all about. Đorđe noted that the website looks much better with the .ME extension, and is easier to remember for their users, making it more friendly for the teams who will use it the most.

As for the future plans on development, Đorđe says:

The app is still in its beta phase, and we have around 200 users as of now. We are happy to see that our users are finding our work useful and we’ll continue working to make the site as good as it can be. There’s a lot of things we need to adapt and enhance on the site to improve the service, and we’re also talking with Riot, the Developers of League of Legends, to improve the service.

The app is completely free to use for all teams who need partners to scrim with, and we’re eager to see what the future has in store for ScrimWith.Me!